END_OF_DOCUMENT_TOKEN_TO_BE_REPLACED

Title: Beauty and the Badge
Series: Charlotte’s Cove #1
Author: Ella Fox
Publisher: Boom Factory Publishing, LLC
Genre: Contemporary Romance
Release Date: November 12, 2019
Blurb
After being held up at gunpoint, Ashley Colton
realizes that life in the big city isn’t for her. She decides to take the
biggest risk of her life and move to Charlotte’s Cove, the small seaside
sanctuary where she’s vacationed every summer since childhood.
Everything falls perfectly into place until
her first day of work, where she meets her new boss Tyler Jameson, the chief of
police. The chemistry between Ashley and Tyler is instant and powerful, but for
reasons of their own, both are cautious about jumping in.
When a woman from Tyler’s past surfaces,
Ashley retreats, making Tyler realize that if he’s going to show Ashley she’s
the only one who has his attention, then he needs to stop being hesitant and
put everything on the line.
Is the badge powerful enough to win the beauty
who holds his heart?
ADD TO GOODREADS

* * * * *  FIVE STAR REVIEW * * * * *
I loved this book. This was one of those sweet, old fashioned romances that are so hard to find these days. The characters were pure magic on paper. Ashley was looking for more than life in the big city with an overbearing boss and danger at every turn. She longed for the life she shared with her grandpa. Tyler knew from one look that Ashley was meant for him. Now he only had to convince her to stay. The chemistry between these two was instantaneous but it had a genuine, slow build to their love story. This story packed a punch with its mix of romance and drama. I wish more books were as well written as this one.

USA Today Bestselling Author Ella Fox has learned a
bunch of stuff along the way but the most important of all those things is that
anything is possible when you try. In 2012 she took a big leap of faith and
published her first book, Broken Hart. Since then she’s written fifteen more
full-length books and several novellas– and every one is a reminder that you
can live your dream as long as you work for it.
Ella’s
favorite things are music, movies, traveling, her dog Mona and, of course,
reading. This isn’t a surprise considering the fact that her mom is USA Today Bestselling Author Suzanne
Halliday.
Author Links
WEBSITE
BOOKBUB
FACEBOOK
INSTAGRAM
TWITTER 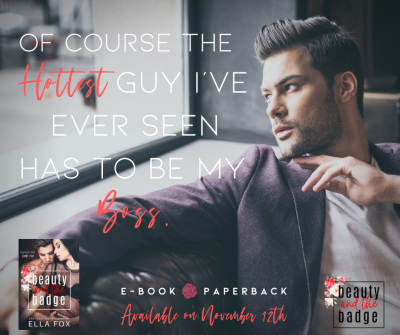 Aurora Rose
Reynolds and her husband, Sedaka Reynolds, created Boom Factory Publishing to
use their experiences to expand and promote upcoming and existing indie
authors.

With over
five years in the industry, and millions of books sold worldwide, we know what
it takes to become a successful author and we will use this knowledge to take
our authors to the next level.

END_OF_DOCUMENT_TOKEN_TO_BE_REPLACED

Dashiel Hampton is her enemy.

Layla Tate reminds herself of that fact every morning she goes to class and sees his smug face smirking up at her. There hasn’t been a moment they weren’t pitted against each other and she refuses to back down…not even when she learns he’s her new teaching assistant.

Layla Tate is going down.

There is nothing that makes Dash Hampton as happy as the look on Layla’s face when she realizes he’s won. He lives to drive her crazy because if he can’t have her beneath him, then he’ll have her any other way he can. He’ll get her to notice him, even if it means making her semester a living hell.

When their classroom rivalry crosses the line between frenemies and forbidden, the hardest lesson they’ll have to learn is that sometimes you have to lose to win.

Also in the Series

Nicole Blanchard is the New York Times and USA Today bestselling author of gritty romantic suspense and heartwarming new adult romance. She and her family reside in the south along with their two spunky Boston Terriers and one chatty cat.

I loved this story so much. It was a great romance with little angst but lots of romance. Dash has always wanted Layla. She was the one woman that challenged his mind and ignited his desire. Layla hated Dash with a passion. They had an extensive past that was full of miscommunication and assumptions that kept them apart. Years later everything changes when Layla walks into her college class and Dash is her TA. Just the sound of his voice irritated her but turned her on too. These two fought so hard to not give into their lust but some things cannot be denied. The harder they struggled only made the story more enjoyable. Their interactions were hilarious and I loved the alternate points of view that helped the story unfold. This was a light and fun romance and I recommend it to everyone looking for that enemies to lovers story.